Earlier this year, Eduflack was honored to be named the winner of the SPOKEie in non-profit education, recognizing the top spokespeople in key industry sectors. As part of the award, I was fortunate to do an video segment with the CEO of the Girl Scouts of Greater New York, the winner in the non-profit youth category.

In our show, we talk about the importance of branding, particularly in the non-profit arena. You can watch the full segment here.

For those that prefer the written word, the full transcript can be found here.

We’ve gone from humble-bragging about our kids and sharing photos of our food to using every waking moment of every day sharing every tweet, every slam, every late night comic diatribe, every propaganda piece, and every doctored photo that seems to support our belief system. And we do so by feeding it into our own echo chambers, sharing with those who already share our beliefs in hopes of strengthening the tribe. No discourse happens. No dialogues are pursued. No debates are engaged. Instead, we are in search of the almighty likes, loves, and supportive comments.

Eduflack’s latest on LinkedIn Pulse, looking at a recent Pew study and how it has affected our political discourse and our social media usage

Earlier this month, I shared with readers of dear ol’ Eduflack that was I was awarded a SPOKEie award in recognition of my efforts as a spokesman for not-for-profit education. Today, I’m happy to announce that next week I’ll be joining other SPOKEie winners from other fields to discuss effective communications, flacking, and branding on a live broadcast hosted by DS Simon Media.

You can register to join us on Thursday, May 3 at 2 pm ET here. 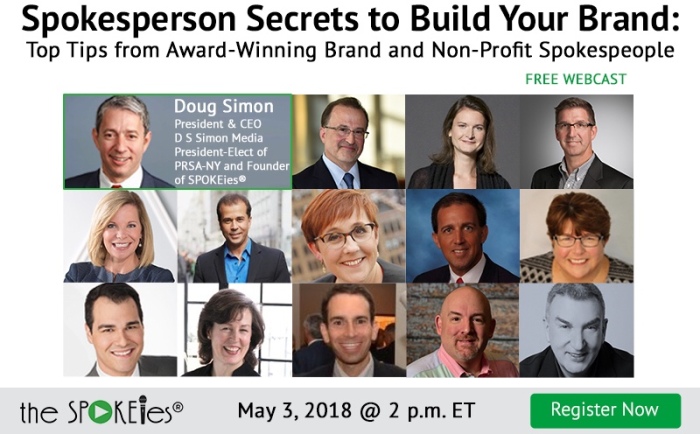 I’m honored, humbled (and quite excited) that this week dear ol’ Eduflack was named a winner of the inaugural SPOKEie awards. Recognizing the best spokespeople in the field, DS Simon Media and its crew of expert judges recognized me as the top non-profit education spokesman in the land.

With so many terrific personalities in the education field, it is a true honor, particularly when I think of so many who are far better than I am. But I am proud of the work I’ve been able to do with the Woodrow Wilson Foundation and proud of the continued evolution of the Eduflack platform for a discussion of all things education.

I hope you’ll wish all of this year’s winners a hearty congratulation. Despite how it appears on TV or in the movies, what we do is neither easy nor glamorous. Being a flack is fairly thankless, as you bear responsibility for the challenges and provide the limelight for others when it is time to shine. But it is necessary work and, when done correctly, incredibly valuable.

Congratulations to all my co-winners. And thanks to all of you, and those like you, for helping make communications a noble profession.

In an era of “alternative facts” and opinion masquerading as media, the truth can be a hard thing to find. Over at LinkedIn Pulse, dear ol’ Eduflack writes on how New England Patriots QB Tom Brady’s claims that “everyone has different truths” and the recent analysis that President Donald Trump has made more than 2,000 false or misleading claims since assuming office is incredibly dangerous, particularly for the communications profession.

No, truth is no longer evident; truth lies in the eye of the beholder. And that should be unacceptable, particularly for communications professionals. For those of us who deal in information, it becomes essential that we prize truth as our most coveted commodity. We should defend our positions and our organizations with all of the zealousness that our positions allow. But we must do so recognizing we can never, ever lie. There may be elasticity in advocacy or in flacking, but there is none in the base truths on which communications and public engagement is based.

Give it a read. I swear it is all true!

With new allegations of sexual harassment and sexual assault rolling in on a daily basis now, it is time for men to have a very real discussion on what is appropriate – and what is not – when it comes to our dealings with others.

As I write on Medium:

Finally, if you have to ask if something is appropriate, it is a good bet it is not. If you have to defend your actions because so-and-so also did it, they what you did is indefensible. If you justify what you have done by stating that it isn’t as bad as what someone else did, you really have no justification for your actions.

Please give it a read. Sadly, these are the conversations we need to have these days.

There is something rejuvenating about speaking on college campuses, particularly when it offers the opportunity to reflect on your profession and your career choices. In our day-to-day world, we can often lose sight of why we do what we do, letting the frustrations of the day get in the way of the successes of the career.

Last week, I had the opportunity to speak with students at Southwest Baptist University in Missouri about strategic communications. Heading in, I wasn’t sure what to expect. I’ve spoken at public and private universities. I’ve presented at Ivy League institutions and community colleges. At HBCUs and foreign universities. Each one is different, each comes with its own set of questions and its own frames of discussion.

Over the years, I’ve learned I’m an effective storyteller. Anyone in the communications profession can go onto a college campus and describe what their job is like. Speakers can approach such scenarios as if they are going in for a first round job interview or talking to someone at a cocktail party that they will never see again. They can provide a “just the facts” approach, as if they are describing the work to a crime scene investigator. Me, I prefer to tell old war stories.

It’s easy to get someone’s attention when you are able to talk about defending bomb-detecting dolphins trained by the U.S. Navy or flacking for a company that allegedly employed paramilitary death squads or managing an “angel of death” scenario at a local hospital or doing rhetorical battle with a brand name like Bill O’Reilly. Such tales make a communications job seem glamorous, taking away from those countless days and years in a cubicle cold-calling reporters and begging them to attend an event or review a release or the reams of paper and the countless drafts before a commentary meets the approval of the cast of thousands who may need to OK it.

Such stories, though, can often be the easy way out. It is one-way communication, with the storyteller (me) simply informing my audience. Even when one opens it up for questions, those answers are often simply more stories, or the expansion of the existing ones.

But in my discussion at Southwest Baptist University, I found a different discussion. Yes, the tales were entertaining (at least I thought so, but I’ve heard them all before). But the questions asked of me were illuminating. I was forced to go into my personal recesses and find answers to questions I haven’t asked myself in a long time. And in a few instances, explore some topics I have never consciously explored as a communications professional.

When I worked for Senator Robert C. Byrd of West Virginia, I got there by watching his floor speeches and trying to parrot them. With Senator Bill Bradley of New Jersey, it was by reading his basketball memoir, Life on the Run. With the African-American national not-for-profit leader, it was from speaking one-on-one with him. With the former college president, it was from watching him speak to small groups. While each experience was different, each also shared a common thread. It was about finding voice in the setting where the speaker was most comfortable, most him or herself.

These were the sorts of questions that my 22-year-old self would never have known to ask. Heck, these are questions that my 30-year-old self wouldn’t have asked either. But these students were not just hearing the stories, but they were listening to them. And they were trying to distill these tales into useable lessons that would help them secure the jobs they sought and enter the careers they dreamed of.

At the same time, they reminded me of why I do what I do, what drew me to it, and what brings me the joy that keeps me from chucking it all and opening that cupcake shop on Grand Cayman. In teaching last week, I learned – or re-learned – a great deal.

(The above was also published in LinkedIn Pulse.)